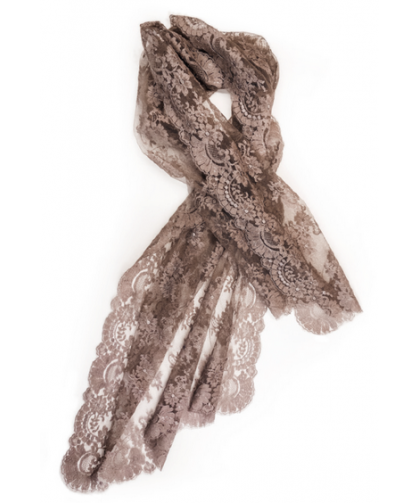 Jacqueline is a Chantilly lace mantilla with scalloped edges and a dense floral motif. Elegant and delicate, it is made in France on Leavers loom.

NEW! Receive a swatche of this item

As a professional, you get a 20% discount on this product Sign in

During the second half of the 16th century, it was Spanish fashion that set the tone in the courts of Europe. So it was that women adopted the mantilla, a long silk or lace scarf, covering the head and shoulders. But it was thanks to Jackie Kennedy, that incontestable fashion icon, that the mantilla attained the status of a stunningly chic accessory.

Following in the wake of that most elegant of all Americans, Sophie Hallette has created a Chantilly lace mantilla called Jacqueline. You can wear it traditionnally, around the neck, or if you would like to twist the codes, wear it as the belt of a summer dress, or as a neck drape to make the mantilla the new black tie. Jacqueline features a large floral pattern, dense and covering.

Jacqueline is presented in an exclusive box and wrapped in a delicate tissue paper.  This mantilla exists in ecru, light pink (thé) and black.